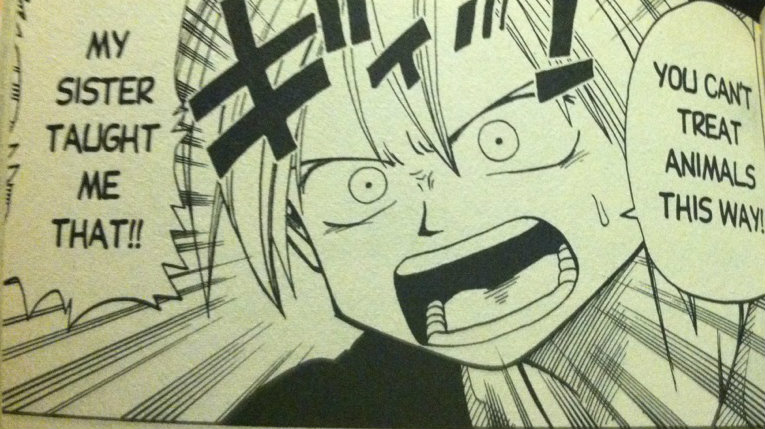 Haru was mostly raised by his older sister, and he really took whatever she taught him to heart. I know this, because he’s always talking about, “my sister taught me that!” I remember that he said something along those lines a lot early in the series, and I remember that it really annoyed me. Possibly because I was thirteen when I first read these books, and therefore my older sister – if you were to ask me – was an idiot. Re-reading these now, it still bugs me a little bit. Not because Haru’s taking his older sister’s advice, but because he mentions “my sister told me…” so often. The other reason is because everything that Haru’s sister has taught him is completely obvious.

Take a drink every time Haru talks about what his sister taught him.

Really, Haru? Dogs are getting impaled on spikes and exploded, but you need your sister’s advice to figure out that animal cruelty is bad?

Despite Elie’s warnings, Haru interrupts the race again. This was Georco’s plan all along, of course: to put Plue in the dangerous race and lure Haru out. Now, there is one thing, and one thing only I will applaud Georco on: he learned from his mistakes. Instead of fighting Haru out in the open, where another explosion could blow his gaseous form away, Georco traps him in a giant steel box with no way out – in other words, no fresh air for Haru to breathe. It kind of begs the question why Georco had a giant, ten foot tall box laying around in the first place, but I can forgive that, because the ridiculous trap was pretty effective. However, I cannot forgive Georco for constantly referring to it as the “Smoke Hiz-ouse”. A part of me died every time I had to read that phrase.

Without oxygen, Haru can’t make explosions, and so it looks like he’s screwed.

The day is saved by Elie, and I love that, purely because it’s the girl saving the guy, and not the other way around. She uses her tonfa blasters (which are like side-arm cannons, I actually like them) to blow up the smoke house to let Haru escape. Plue manages to steal Georco’s dark bring, so he can no longer turn himself into gas. Out in the open again, Haru delivers the final blow to Georco, thus finishing our first Monster of the Week.

With all the action, there wasn’t a lot of plot in Chapter 7, so we’ll move on to Chapter 8.

Now that Georco’s been taken down, Haru and Elie take a minute to talk. Of course, this is after Elie nearly blows up half the stadium with her tonfa blasters.

It turns out the Elie knows where to find Musica, the blacksmith that can repair Haru’s sword. She also reveals what little there is to reveal about her backstory: she has lost her memory. It’s a tired trope at this point, but what I like about Elie is that she’s not angsty about it. There’s plenty of “waaah, I can’t remember!” characters out there, but Elie is happy, excitable, and generally a fun character, rather than being mopey about it. She doesn’t take up too much time feeling sorry for herself, which is nice to see. Yes, she would like her memory back, but she’s also not going to let herself be miserable over it.

Haru and Elie decide to leave Hip Hop Town together. They say that Demon Card is out of commission, so they won’t have to pay the fee to leave. But how does punching the daylights out of Georco take down an evil organization that’s clearly taken over the town? I’m sure Georco has some underlings who would gladly take over his role as boss. Or maybe that’s the end of dog racing in Hip Hop Town forever because Elie completely destroys the stadium.

Seriously. She’s so excited to be leaving town with Haru that she lets off another couple shots from her tonfa blaster and the stadium starts to collapse. Her reason:

The duo escape the stadium by…jumping on a chariot pulled by dogs. I’m not joking. This whole series is so goofy, though, that I think I’ve learned just to go with it by now.

We’re nearly at the end of the chapter, but there’s just one more thing I want to bring up. We get a brief cutaway to some of Demon Card’s generals, hanging out in the fortress Rhapsodia.

This is when it hit me.

THE TOWNS ARE ALL NAMED AFTER MUSIC GENRES.

Ever since I was a kid I thought that all the town names in Rave Master were really dumb. And I never once thought there was a musical motif in the names. HOW THE HELL DID I MISS THAT?

It turns out the town names aren’t dumb; I am.